Having joined Arsenal in 2012, Olivier Giroud left the Emirates Stadium and made a switch to Chelsea in January.

In his final years at the north London club, the 33-year-old was restricted to limited playing time, but not a lot changed since he moved to Stamford Bridge as the France international made six league starts and came off the bench on seven occasions for the Blues in the second half of last season.

With Arsenal, he won three FA Cups and his first success with the west London outfit was winning the same cup competition in May.

Playing to his current club, the Frenchman has now said Chelsea are the top English side.

Giroud explained this during an interview with French newspaper L’Equipe when asked why he decided to stay at Chelsea, despite interest from elsewhere.

“It did not go as far as we could say. There was really a contact [from Marseille] last year, but nothing really concrete this summer,” he said. 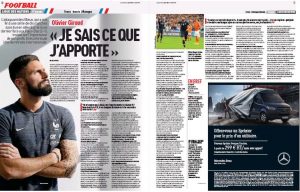 “I had just arrived at Chelsea, it was not the time to pack my bags again three months later. For me, Chelsea is the top club in England, the one that has won the most titles over the last ten years. I am where I wanted to be. So why leave?”

Giroud’s contract at Chelsea runs down next summer and he has an option to further extend it by a year. The frontman has not ruled out any options, while he earlier revealed a decision on his future will be taken in April or May 2019.