‘Wolves are doing great for the last two seasons. Look at their success with Portuguese players. Now it’s our time to sign one of these guys, let’s go and see what we can get’

Well, that’s the conversation we can imagine happened at Queens Park Rangers’ headquarters before the impressive scouting mission the club made this weekend.

We’ve already covered stories which have shown that the Loftus Road side scouted the league matches between Porto and Marítimo and Moreirense and Benfica. Now, according to A Bola, there are two other games who club scouts have attended.

QPR have reportedly watched Tondela’s 1-1 draw against Feirense and Aves’ 0-1 home defeat to Chaves. Although the newspaper reports the presence of scouts in both games, the outlet doesn’t seem to know who the London side had an eye on. 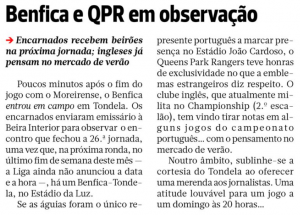 All the games QPR watched were hosted in the north of Portugal, but as some of the matches happened at almost the same time, the club probably had a team of scouts covering that area.

As the Championship side haven’t recently been linked to any players from Portugal, we can just guess they went to take a look and see if there’s any local talent to be watched at this final part of the season.