This Felipe Anderson to West Ham story is getting more and more ridiculous by the day.

Remember a few weeks ago when we relayed Il Messaggero’s report that Lazio were asking West Ham to overpay for Jordan Lukaku to then underpay for Felipe Anderson because they owe Santos 25% of any future fee for the Brazilian?

They’re still at it.

The same Il Messaggero are now reporting that Lazio want a combined package of €70m, yes, SEVENTY MILLION, for the pair.

This would still see West Ham pay more for Lukaku than they would for Felipe Anderson, but that would surely mean the Hammers would end up spending €40m on the left-back, which is madness. 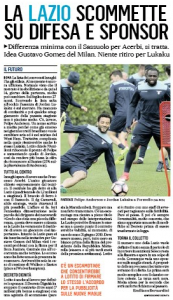 We hope it’s a typo, but even €60m would be ridiculous when the previous report stated a little over €50m for the pair would be fine.

Honestly, we’re lost. Both for words and in general.

If that’s how Lazio are going to do things, then West Ham might as well step away and focus elsewhere.

Since then, we’ve even had a report from Brazil claiming West Ham had contacted the Brazilian club to try and get them to give up on some of that percentage.