If Wednesday’s edition of Il Tempo are to be believed, then West Ham’s reluctance to meet Claudio Lotitio’s demands for Felipe Anderson has made the Brazilian’s entourage restless.

Already reaching a standstill late last week, the recent negotiations between the two sides don’t appear to have achieved anything, as the Hammers are still short of the €45m (or €48m depending on the source) requested by Lazio’s president.

Felipe Anderson has made it very clear he wants to leave Rome, with the Premier League his preference, but should that fall through, backup plans seem to include La Liga and AS Monaco.

According to the Italian newspaper, the 25-year-old’s entourage have already been in touch not only with Valencia, but ‘especially’ with AS Monaco, where super agent Jorge Mendes (who gets on very well with the Serie A side) could help get any deal over the line. 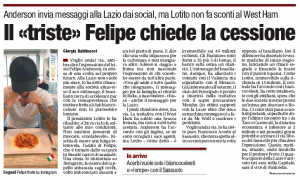 The fact neither neither Corriere dello Sport nor Il Messaggero have anything on the situation today suggest not much else has happened, while Gazzetta dello Sport just corroborate what Il Tempo say about everything being at a standstill between West Ham and Lazio.

It’s not the news you wanted, we know that, but there’s not a lot we can do if both sides are proving stubborn in what should be a fairly straightforward deal if the Hammers agree to spend around €5m more.