Fanatik claim Everton attacker Henry Onyekuru has told his agent he wants to remain at Galatasaray next season.

According to the Turkish newspaper, the 21 year old said he is very happy at Galatasaray and wants to play in the Champions League next season.

Members of Galatasaray’s board will reportedly travel to England in the coming days to open talks with Everton with regards to a potential transfer and it’s claimed the Turkish side could make an offer to sign Onyekuru permanently.

According to Fanatik, if Everton reject Galatasaray’s offer then the Super Lig side will again look for another loan deal.

It’s unlikely the Turkish club will be able to put forward an amount deemed acceptable by the Premier League side, and they’re going to be fortunate if they can negotiate another loan spell, with there thought to be interest from several other clubs.

On top of that, the youngster has never made a secret of his desire to play in England, so may not be willing to give up that dream just yet.

Onyekuru has scored 16 goals for Galatasaray this season, helping the club to a domestic double. 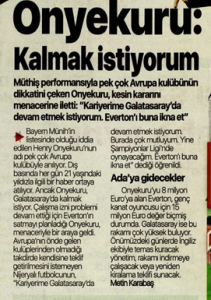 The 21 year old has yet to play for the Toffees due to issues getting a work permit in England.