Home Europe Latest from Spain on Sunderland’s effort for Iborra, Moyes has decision to...
SHARE 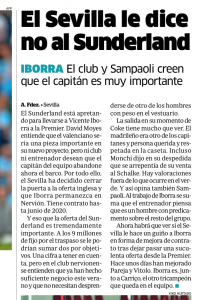 Sunderland are reportedly interested in signing Sevilla’s Vicente Iborra. Sky Sports claimed David Moyes’ team had a £7m fee accepted by Sevilla, but reports in Spain suggest something else.

According to Marca on Tuesday, Sevilla have rejected an offer of around £7m for Iborra.

The Spanish side are keen on keeping the midfielder in their squad. Marca say Sevilla have ‘closed the door’ and that the player is set to remain at the club.

Sevilla play in the Champions League this season, and would certainly want to keep their best players at the club.

David Moyes was reportedly keen on adding the 28-year-old, but it now appears he might have to look elsewhere.

Iborra has another four years left on his contract, and it’d be interesting to see if Sunderland return with another offer for him. Moyes will have to decide how much he really wants Iborra, and how far Sunderland are prepared to go.