Marco Silva to FC Porto is really a thing in Portugal today. Local papers all agree that the Hull City boss is the number one target to take charge of the Dragons this summer, and the stories only differ on how advanced things are.

Correio da Manhã is the one saying it’s all agreed. According to them, Porto want Silva, Silva has accepted, and the parties should now agree the small details and sign the contract.

Other outlets, however, are not jumping the gun so easily. O Jogo, who mention Silva as ‘the former Hull City manager’, claim that he’s number one in the list, but hasn’t agreed to sign yet. Record says the same. 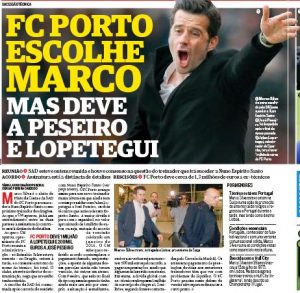 Porto are confident they can land the manager due to their guarantee of fighting for league titles in the next few seasons and their constant presence in the Champions League, both of which Silva will not have in England in case he joins a mid-table club.

The manager is said to be in Lisbon today, with Record saying Sky was lying when they claimed he was in Porto on Tuesday.