If it’s possible for L’Equipe to be both confident and hesitant on Claude Puel to Leicester City then they’ve managed it.

With claims building that former Southampton manager Puel is the number one candidate to take over the Foxes, the French newspaper have claimed he could be announced today as the club’s new manager.

But there’s still a little doubt thrown in.

L’Equipe headline their article ‘Puel named as coach today?’, but don’t make it clear who they’re asking… themselves perhaps.

Puel has been discussing a three year contract with Leicester, explain the French newspaper, and things have clearly been going well on that front.

Edged out of Southampton, the Frenchman can probably feel himself at least a little poorly treated after his stint in the Premier League. 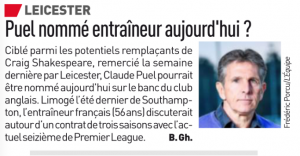 Certainly not doing a particularly bad job given the sales at Southampton, Puel was criticised for a lack of attacking football and goals, but it hasn’t exactly been a goal-laden revolution under Mauricio Pelligrino, who didn’t have Alaves free-scoring last season either.

Quiet spoken Puel may relish the chance to get back into the Premier League and try to prove that Southampton were wrong in pushing him out of the club.