Eric García was expected to arrive at Barcelona in the summer, but the deal didn’t go through because they failed to meet Manchester City’s transfer demands.

The La Liga side’s failure to sign the 19-year-old saw Ronald Koeman finish the last transfer window without having a new centre-back at his disposal.

Koeman, who started the season with limited options in the heart of the back four, saw the number further reduced last weekend when Gerard Piqué picked up an injury in his side’s defeat to Atlético Madrid.

There have been concerns at the Catalan club over losing the 33-year-old for the next few months as specialist Dr. Ramón Cugat is yet to make a decision on whether or not to put Piqué under the knife.

The former Everton manager has suggested Piqué’s injury setback could force his side to bring in a new centre-back.

Sport have relayed Koeman’s comments and add García is ‘best positioned’, suggesting he’s leading the list of targets. The Citizens player is still desired at the Camp Nou after Barca failed to sign him in the previous window.

The newspaper states: ‘Now, with the losses that the team has, his arrival becomes mandatory, although Koeman is aware of the club’s economy.’

Barcelona, however, can only bring in new faces to the club in January if they manage to offload some current players who are no longer vital to the club’s plans. 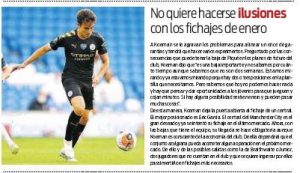 The next window will be the last opportunity for City to cash in from García’s sale because he will then have an opportunity join the club of his choice on a free transfer next summer.