It’s all about Leander Dendoncker in Belgium at the moment, yet no one seems to be able to get their story straight.

The 22-year-old midfielder was the subject of several August transfer rumours sending him to Everton, Monaco and Manchester United, which he openly admitted affected his start to the season, yet the Anderlecht star eventually ended up staying at his club.

Over the course the last month of the transfer window, his price appeared to drop rather drastically, with claims it went from €38m to around €20-25m.

A report on Friday morning from DH stated the player’s agent, Christophe Henrotay, got in touch with the Toffees on the 24th of August, but nothing materialised. 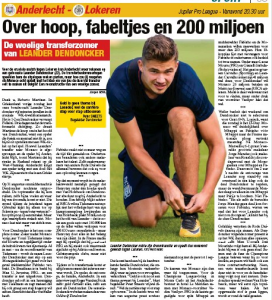 The reason why isn’t explained, but Het Belang Van Limburg seem to think Everton were put off by the €38m price tag.

Problem is, that doesn’t make sense, because on the 25th of August, Anderlecht’s president, Roger Vanden Stock, admitted in an interview with DH that a ‘hefty €20m or so’ offer would see Dendoncker be sold, with similar claims being made by the club’s director of football as early as the 16th of the same month.

So what exactly happened?

It could be Everton weren’t that interested in another defensive midfielder just yet.

That, or Ronald Koeman’s side were simply thrown into the mix to drum up interest.