Marco Silva fans get quite an interesting gift from Portuguese newspaper Record today, as the outlet managed to have a seven-page interview with the Fulham manager.

The conversation was about the coach’s career, especially about the challenges lying ahead after guiding the west London side to the Premier League.

Record started the interview asking Silva if joining Fulham was ‘a step back to make two ahead’, and the coach admits he took a bet when taking charge of the club.

“It was a big risk, I don’t hide it. Calculated, but it was a risk,” Marco Silva told Record.

“Once again, the country where I wanted to be. I was packed for Turkey and had a meeting with the owner of Fulham, who came to Portugal on purpose to talk to me about the project. It was a step backwards, but I decided to take over because I knew the club and the competition well and I felt that we could give something to Fulham. Outside we didn’t talk much, but from the beginning we talked internally about being champions.

“In the 16 months at home I had approaches from the Premier League and the Championship, but I always chose not to go. Fulham are a different club, a historic one with good conditions. When a club moves down a division, it has a financial dimension, but they cannot go to the market to sign as they want. The base was there and it was strong, we signed some players at zero cost or on loan.

“Players were open to our philosophy and what we wanted to implement. There were players with a tremendous evolution and who had the best seasons of their careers, players with a background in English and European football. The way the team played and was dominant from the first to the last game, the way the teams recognised our merit, is gratifying. We did something really good for Fulham and the fans got involved with us and our style.”

Silva then also talked about the Fulham that we’re about to see in the Premier League, as he pointed out that he may not have the final squad in his hands yet.

“My philosophy as a coach is not going to change and the players know that. The passionate way I see football, sometimes too much, that won’t change. We scored a hundred or so goals last year; in the Premier League there are one or two teams that do that. There are things that will not be the same. As much as I want to, I know it won’t happen.

“We’re late, I’m not hiding, and the management has made an effort to sign the players we want. It’s an ambitious plan when we decide that nine or ten players will not continue and that we have to sign those nine or ten players, with more or less money. Eighty percent of the starting eleven stayed at the club; we lost Fábio Carvalho and Seri, in this case our decision. We had two months in which I felt that more players could have arrived to have a pre-season to integrate everyone.

“We’ve already had four weeks and only two new players. Six to seven players left. Now we have, as they say in Portuguese, to fight back to be competitive. We have to add Premier League quality and experience to this group. We want to cement the club into the Premier League because, honestly, that’s where the club belongs. Coach, players, management, fans… we all have to give more to cement this club in the Premier League and, later on, think about other goals. The gap between the Championship and the Premier League is widening and we have to be realistic but also ambitious.” 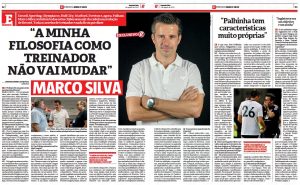 Also, when talking about the transfer window, one of the questions put forward by Record was about João Palhinha, with them asking what made his signing ‘obligatory’ and how the coach managed to convince the player despite competition for the transfer.

“There was competition and João’s goal of playing in the Premier League, despite being happy at Sporting. I’ve known him for many years and he’s risen through the ranks. He won levels and was loaned until he reached a coach who identified with him and who made him Sporting’s starter. He ascended with hard work and persistence. I’m glad for that, regardless of whether you’re my player now or not. It was a struggle for us because we don’t have a lot of financial power. We needed a 6 and, knowing that he was available to play in the Premier League, we tried our best. I made a lot of effort and it was a difficult business. It’s a big amount, but we’re satisfied. He will have to adapt quickly, because in a fortnight he will be playing.

“He has his own characteristics and will be very important for the present and future of Fulham. As for the clubs that were interested… I have no idea, but we managed to sign him and we are pleased about it.”

The manager was as well asked about Fabio Carvalho, claiming he knew he had a player full of potential once got to know him at Fulham.

“He had hardly played in the first team, but he knew that he was a player that the academy felt was in a position to reach the first team. When we started working with him we felt he had the quality and profile for the position. He had a positive pre-season and had an impact in the first few games. He had a nasty foot injury that ruled him out for a month and a half, two months out and which coincided with rumours around him about a renewal.

“Fabio has a lot of quality. He is a very good kid, humble and likes to learn, train and play. He has tremendous technical quality, an ability to play between the lines that is not easy to find; the first reception is of a high standard and that’s why you feel so comfortable in that space. Unfortunately, we lost a key player, but we reached a point where he only had one year left on his contract. He chose not to renew and I, as a coach, decided to withdraw sports performance and then he would go his way. We did our best to get him renewed, but we couldn’t.”