Eder Militao is going to be playing for Real Madrid next season.

The transfer was announced by the Spanish club last week and they’ll be paying the player’s €50m buyout clause to FC Porto.

Madrid wanted to get the deal done early because Militao’s clause rises to €75m in the summer, and they also wanted to avoid competition… with Marca saying that included a serious push from Manchester City.

Manchester United were, by some distance, the Premier League club most linked with a swoop for the Brazilian, and if any English club had lost out it was thought to be them.

However, Marca insist that ‘until the last moment’ Manchester City and Barcelona tried to snatch the transfer away from the clutches of Real Madrid. 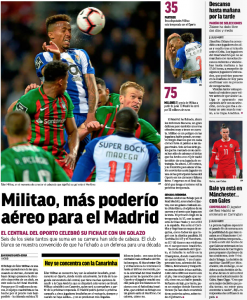 If that’s true, it would mean Pep Guardiola is looking for a new senior central defender.

Given Militao is now off the table, Manchester City would have to turn their attention elsewhere.

There’s a young man at Ajax who may be worth a look.