Home Europe ‘Last details’ for player’s transfer to Man City to be finalised in...
SHARE

For the last 24 hours, there have been various reports in Argentina and Europe, stating Manchester City will be Julián Álvarez’s next destination.

Argentine newspaper La Nación on Saturday give an insight on what figures the Citizens are offering and how they managed to get ahead of competition to seal the deal.

It’s claimed River Plate received a ‘formal offer’ from the English champions yesterday, who were the only ones to submit a proposal, despite the forward being linked to various clubs.

An agency that represents other players and was involved in past deals with the Etihad club, took care of the negotiations. They acted as an intermediary between River Plate, the City board, Txiki Begiristain, and Fernando Hidalgo, the player’s agent.

River Plate leaders assured the newspaper the proposal received from City, including bonuses, is $27.5m [€24.4m] and this is more than the 21-year-old release clause. This allows them to collect $20m [€17.6m] after giving a percentage of the fee to the player’s former club. 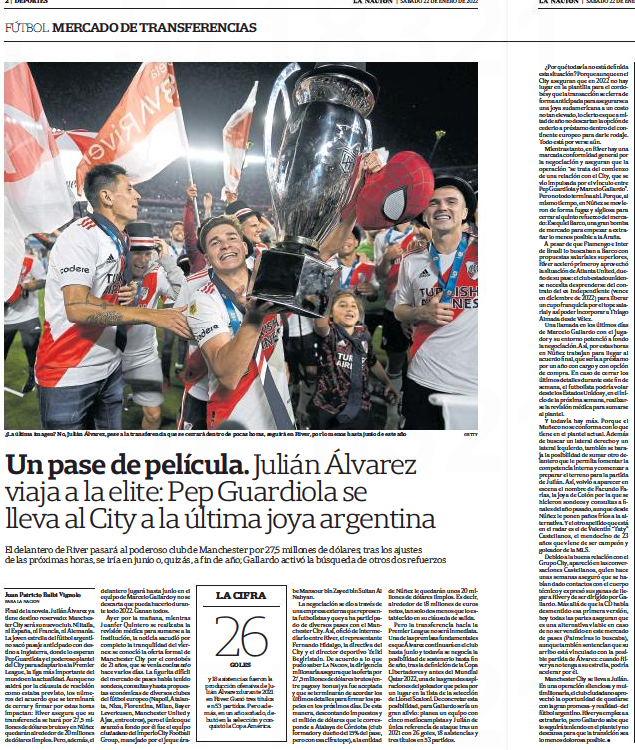 This has been ‘already accepted’ and the ‘last details’ to finalise the deal will done in the ‘next few days’. The Argentina international will not move to Manchester immediately as he will stay at River Plate on loan until June.

There is also a possibility to extend the loan deal until the end of 2022 and there’s a reason it has not been defined yet, because City don’t rule out loaning him to a European club next summer.

There is a ‘general agreement’ for the negotiation and this operation allows River Plate to begin their relationship with the Manchester club and the City Football Group, ‘which was driven by the link between Pep Guardiola and Marcelo Gallardo’.

This has also allowed Gallardo’s side to discuss New York City FC [owned by CFG] forward Valentín Castellanos, who

La Nación end the long report by stating: ‘Manchester City take Julián. In a silent and multimillion-dollar operation, the Citizen took advantage of the opportunity to keep the great promise –and reality– of Argentine football. River are already beginning to miss him, but Gallardo knows that he will continue to have him in the squad and does not rest so that the transfer is as painless as possible.’