Home Europe Laporta has 6 names ‘on the table’ for Barcelona signings – Wants...
SHARE

Joan Laporta appears to have shaken the hand of half of Catalonia this week, as he eases his way into being Barcelona’s new president.

Thursday saw him receive the financial guarantees necessary to make his appointment official, however, there were later claims that those guarantees only last a matter of months and there could be new Barcelona drama on the way in the not too distant future.

Back to the optimism that has broken out around the club in recent days, Friday’s edition of AS report Laporta is already thinking about signings for the summer window.

There are six names ‘on the table’ for Laporta as he tries to work out what is going to be possible financially. Those names are: Erling Haaland, Sergio Aguero, Memphis Depay, Eric Garcia, David Alaba and Georginio Wijnaldum. 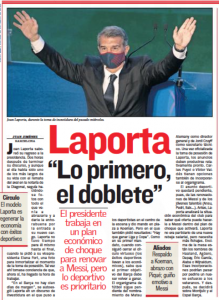 That all of those apart from Haaland would be free transfers says a lot about Barcelona’s finances. AS even state that current squad members could be asked for a new financial effort to help… which means accepting a fresh wage cut.

Should that happen, the current peace which has broken out at the Camp Nou may be tested.