The chat was, or was meant to be, mostly about the The Best FIFA Football Awards.

However, as the Portuguese press normally does, they tried to find another subject in Portugal that the interviewee is familiar with, and in Lampard’s case, that’s José Mourinho.

Having worked under Mourinho for years at Chelsea, Lampard was asked why the manager didn’t get close to winning the award.

“For this type of award, usually the coach wins who wins the Champions League or excels in another way, like Claudio Ranieri, last year. José Mourinho won the Europa League and did well in his first year as manager of Manchester United, nobody doubts his qualities.” 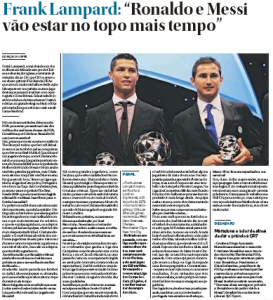 Quizzed if the manager could have his glory days back at Manchester United, Chelsea legend Lampard said: “With the team that he has this season, Manchester United are even stronger and José Mourinho has been working on some players for over a year.

“Last season the bet was obvious in Europe, but I believe that this year he will also fight for the Premier League. In the Champions League they will hardly be out of the top eight and probably can go even further. The team is growing, as they have shown at the start of the season.”

The questions about Mourinho weren’t over, and Diário de Notícias mentioned they know Lampard has a big admiration for the manager: “I never hid that my football changed with him. José Mourinho made me see football in another way, the way I played, was fundamental to my career, I never hid it.

“Even today he’s one of the best in the world, I have no doubt, it’s not individual trophies that say he hasn’t evolved. He’s still today one of the best. In fact, he will be the key to Manchester United’s success.

“This was also seen last season. With a team under construction, he won a cup and the Europa League in a pragmatic way. They hired him to win and he already started to show results. He is a coach who has a lot of confidence in himself and easily delivers this message to the players.”

Finally, the former Chelsea midfielder was asked about another Portuguese boss, this time Marco Silva, who’s having good campaign at Watford after a great spell at Hull City: “He’s been surprising, his teams play well and he has received much praise.

“He is a very young coach and will certainly have a great career ahead of him. Last year he worked at Hull City for a short time, but this season he started early in Watford and things are going very well for him, he has to be very valuable.”