Wolverhampton Wanderers’ João Moutinho has just over a month left on his contract and can leave the Premier League side as a free agent, if there is no change in this situation.

He was a regular figure for the Premier League side in the recently concluded season, making 39 appearances, out of which 35 of them came in the league.

The midfielder has an option to either continue at Wolves or make a switch elsewhere this summer.

According to Jornal de Notícias, the 35-year-old has an opportunity to continue his career in Serie A, where AS Roma are named as the interested party.

Wolves manager Bruno Lage is convinced by the Portugal international’s performances and has ‘asked for the player’ to be offered a new contract. However, his employer have ‘set other priorities for the midfield’. 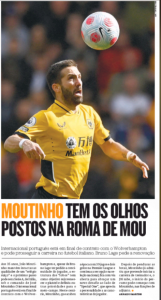 This situation has opened a path for the ex-Monaco man to ‘embrace a new challenge’ at Roma, where José Mourinho is in charge.

The former Chelsea manager ‘appreciates the personality and characteristics of the player’, and a move there could help Moutinho became his compatriot’s assistant in the future.