Out of contract in the summer, Daniel Sturridge will be faced with a decision come the end of the current campaign.

Depending on whether Liverpool offer him a new deal, the England international could either choose to stay at Anfield, leave the club but remain in the Premier League or try his hand at football abroad like so many other players are doing these days.

Perhaps the last chance for him to earn a big contract, it will be a very important decision and one he won’t take lightly, but, at the end of the day, it all depends on what ends up in front of him.

According to France Football this week, one club who are likely to come forward are Real Betis in La Liga. 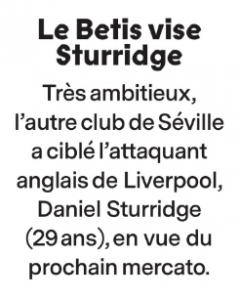 The French newspaper explain the Spanish side, based in Seville, are interested in the former Chelsea forward, wanting to add him to their already ambitious project.

Currently four points behind fourth in eighth, Quique Setién’s side already showed they aren’t afraid to rival Premier League teams on the market when they signed William Carvalho from Sporting CP, and their move for Sturridge would show that determination once more.

We’ll have to see if this grows into something bigger or whether it remains a simple idea, but it’s certainly one to keep an eye on going forward.