They claim that the relationship between the midfielder and manager Santiago Solari isn’t good, and they can’t even look in each other’s eyes.

Neither of them have their stay at the club guaranteed. Isco may walk to a new side where he can play more, while Solari depends on the good results to stay for next season.

That’s why the player will wait and see if the manager will stay. If he does, then Isco will be looking for a new club, and it’s claimed he has four options: Manchester City, Juventus, Chelsea and Napoli.

Pep Guardiola’s side would be Isco’s favourite option, because of the style of his game and for his need of a manager who trusts him. 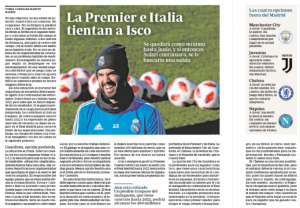 A reunion with Cristiano Ronaldo is considered to be the second option, and them comes Chelsea.

The Blues only have an advantage over Napoli because they’re an important club in the current scenario, but the football played at Stamford Bridge is said not to be attractive for the midfielder.

ABC’s story is really detailed and shows no rush to put out a rumour for the January transfer window. That’s why it sounds so reasonable, even because Isco’s departure will still depend on several factors. They say Real Madrid will demand €100m for his transfer.