Marca seem to have had a transfer idea, and present it in their Monday edition as something a little more concrete. With Barcelona’s long held desire to sign Hector Bellerin from Arsenal, throwing a Barcelona player into the mix is considered.

That’s been mentioned before, but the player is usually Arda Turan, and that particular track hasn’t really gone anywhere.

The Spanish newspaper say ‘several factors’ suggest the deal could happen. Rafinha fancies a move to the Premier League, and feels he’d fit in well at Arsenal. He’d get prominence and Arsenal suits his style of play, all helping Rafinha showcase himself ahead of World Cup 2018.

Arsenal are said to believe signing Rafinha would add strength to their midfield, and it’s a deal 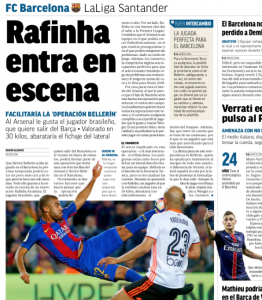 Then Bellerin comes in. With Barcelona valuing Rafinha at €30m, the cost of signing the right back would come down significantly.

These type of deals very rarely happen, so it’s a long shot, to say the least.