The Turkish newspaper report the 28 year old is looking to leave Everton in the winter market following a lack of game time under Marco Silva this season and the La Liga giants could look to sign him.

Tosun is hoping to get regular first-team football under his belt before Euro 2020, with Turkey currently topping their group ahead of France with two games remaining.

Albert Celades’ side are currently sitting in 8h place in La Liga, after picking up 13 points in their opening nine matches. Subsequently they are looking to strengthen in January to bolster their Champions League qualification chances and Sabah say the Everton player is an option. 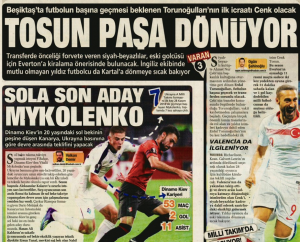 Besiktas are also said to be interested in signing the Turkey international.

Tosun has played just two games for Everton this season and is under contract with the Premier League club until June 2022.