SK Slavia Prague will face Arsenal in the quarterfinals of the Europa League and they made it to the last eight of the competition after eliminating Rangers.

A 2-0 win at Ibrox on Thursday was sufficient for the Czech side to knock Steven Gerrard’s Scottish Premiership champions out of the competition.

Slavia’s win over Rangers were overshadowed when claims of racism were made. Glen Kamara, the Rangers midfielder, was allegedly racially abused by Ondřej Kúdela.

Steven Gerrard came out in support of Kamara and stressed he “100 percent believes” the Finland international.

Slavia have denied the allegations and Kúdela has also come out in public to deny that he hurled racist abuse towards the Rangers player.

“Yes. I completely reject accusations of racism. Who knows me knows who I am,” Kúdela was quoted as saying by iDNES.

At the time of the incident, Kúdela was seen tallking into Kamara’s ear, but what he whispered wasn’t caught on camera because the Slavia centre-back used his hands to cover his mouth. He has explained why he put his hand on his mouth.

“The opponent played very hard from the beginning, culminating in insidious interventions in the second half, mainly a criminal foul on Kolář. I saw him bleeding and I was really worried about his life. Football was on the sidelines at the time,” he said.

“Then there was another unfair tackle on Kuchta. The home team did not bear the course of the match, the result or their performance. And Rangers wanted to make the conclusion as unpleasant as possible for us.

“Bořil and I stood for the fouled Kuchta, he started cursing at us. Maybe the hands in front of my mouth arouse suspicion, but I do it automatically on the field,” he said.

“Look at other matches, it’s a common practice when communicating with teammates, coaches… Most players do it, either as a defence against an opponent or in front of the cameras. How many times do you say something important about tactics and then do the move automatically.”

Alexander Bah claimed on Friday that some Rangers players stopped Slavia from entering their dressing room. This has now been backed up by Kúdela.

“The home team did not want to let us into the dressing room for over three quarters of an hour. I haven’t experienced anything like this. Unfortunately, even UEFA was unable to help us at that moment, despite all their efforts. The hosts did not respect their opposition at all,” the defender explained.

Kúdela claims he and UEFA representatives were left surprised with what happened when he decided to approach Kamara inside the tunnel.

“When it seemed that the situation had calmed down, I met Kamara in the tunnel. In front of UEFA representatives and both coaches, he punched me in the face, preparedly and without any warning,” Kúdela stressed.

“I did not react in any way, then Kamara was stopped by both the security guards and UEFA representatives, who were completely shocked and shaken by what they saw. I left, and I had to do a doping control, which I was expected to take.”

When asked if he regrets running towards Kamara on the pitch, Kúdela said: “I regret that it doesn’t say what we’ve accomplished.” 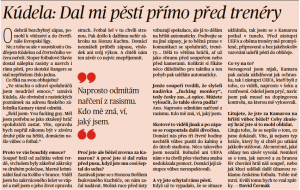 “You know, I’m not the type of player who wants to complain after a game; but I’m sorry for the feedback that conclusion has generated; there’s no talk of how brutally and over the edge of fairness our opponent played, or how the boys made another amazing advert for Czech football.”