Home Europe Koeman a ‘self confessed admirer’ of target, player will be ‘integral element’...
SHARE

Everton are the latest Premier League club to be strongly linked with Carvalho, after West Ham made an absolute hash of trying to sign the midfielder during the summer. West Ham bounced into talks with huge arrogance and little respect for Sporting, clearly completely ignorant to how to best deal with the big Portuguese club and its president.

Should Everton want William Carvalho in the winter window, then they need to work a lot more wisely, but they couldn’t approach it much worse than the Hammers.

Record say Ronald Koeman is a ‘self confessed admirer’ of Carvalho, and wanted to sign 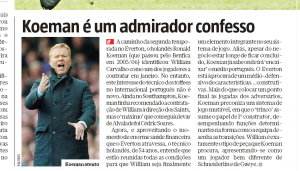 the midfielder whilst Southampton manager, but didn’t have the funds.

Perhaps more importantly, Record believe Koeman already knows exactly how he’ll use Carvalho for Everton. The Dutchman is said to believe Carvalho would be an ‘integral element’ at Everton, and provide something different to the current midfield options.

Koeman is said to want someone who can both end attacks of the opposing team, and start attacks for Everton, and believes Carvalho is that man.

From Portugal: ‘Spectacle’ from Rangers fans highlighted – Steven Gerrard’s side ‘practically at home’

From Portugal: ‘Spectacle’ from Rangers fans highlighted – Steven Gerrard’s side...