Rodgers joined the Foxes midway through last season, arriving from Celtic after the Premier League side decided to part ways with Claude Puel.

His time at the club has been nothing but successful, with the Foxes building on a strong start under his leadership last season to challenge the top six this year.

Many are predicting that the Northern Irishman could even lead Leicester beyond that, with a shot at the top four not out of the question.

Pereira is certainly impressed by what he has brought to the table, saying his arrival at the club was a ‘right turn’ for the club.

“Brendan Rodgers has brought confidence and his very accurate knowledge of the Premier League,” he told L’Equipe.

“This is his culture; he knows how to lead the players here and has the right connections to get the best from each.

“He likes to have the ball, and he wants to press up against any team. His way of playing fits well with our squad. It is just as effective in attack as it is in defence.

“It was not a bad season before his arrival, but it was there that we took the right turn.”

The Foxes are certainly showing the kind of form that has plenty excited about where they may end up this season.

Seven games into the new season they sit third in the table with 14 points to their name, just two fewer than champions Manchester City.

That puts them right in the hunt for a top-six place, and Pereira admits that is the aim, although they are wary of other potential challengers. 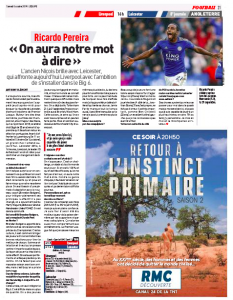 “This year, we want to break into the Big 6. It is difficult, but we have more than enough quality,” he added.

“There are a few players who have matured, and everyone knows each other better.

“Chelsea and Arsenal are showing some difficulties, but of course, they remain strong teams.

“We have already beaten Tottenham, but we also watch Everton, West Ham.

“This season, I feel that there will be surprises, and we can be part of it. But we are well below Manchester City and Liverpool.”