Lorenzo Insigne is a little frustrated.

The 27 year old has spent his entire career at Napoli, apart from three loans, and shown his commitment to the club.

With some questioning that commitment, he said at the weekend that he’ll give his all for the club whilst he’s there, which gives a tiny bit of doubt.

Several clubs have been dragged in as potential destinations, and Liverpool is one. With Mino Raiola being the player’s agent, the situation could easily take a more serious turn.

Journalist Mimmo Malfitano spoke to RMC on Monday (via TMW) and said: “All this makes one think, because when a footballer says he will give 100% while he remains, he suggests that he may be ​​taking into consideration the idea of some offers that Raiola could already have in his hands. Insigne is interesting Manchester United, PSG and Liverpool, but this is nothing new.

“Klopp is one of the greatest admirers of Insigne, but there is always one. Lorenzo is tied to Napoli for another three years, De Laurentiis (Napoli president) can hardly have the intention to sell him. Obviously if the boy – through the agent – were to show the desire to go elsewhere, the club could consider dealing for him with some clubs.”

The same journalist has an article in Tuesday’s Gazzetta dello Sport on Insigne, and Liverpool and the other clubs again get a mention. 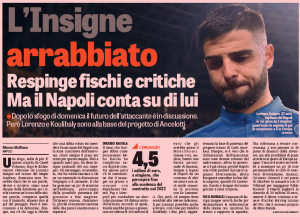 It’s stated that in Naples there’s a belief Raiola is ‘ready to deal’ with Liverpool and the others for Insigne.

Rumour of a €100m offer from Manchester is also mentioned, but Malfitano then suggests it could all be ‘fantasy’, because of the difficulty of dealing with Napoli.