Home Europe “Klopp marked me a lot” – Midfielder on his Liverpool experiences with...
SHARE

Among the many stories the Portuguese media has this week about the Champions League clash between Porto and Liverpool, newspaper Record features an interview with João Carlos Teixeira.

The midfielder, who played for both clubs in the past, has shared his opinion on the match and also talked about the feelings he has for each of the sides.

“Liverpool have some favouritism, due to their history and the quality of their team, but at home FC Porto have already shown that they are a strong, consistent team, defend well, and are good on the counterattack. I believe it’ll be a good game, well played, with a lot of goals,” João Carlos Teixeira told Record.

“I hope the best team wins… I’m still Portuguese and I’m perfectly aware that it’s good for Portugal for FC Porto to win, but I’m fond of both clubs and, as such, I don’t assume any preference. May the best team on the pitch win. I was very cherished at both clubs.” 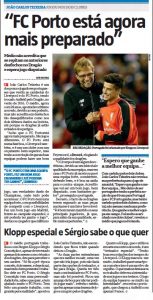 On his years with the Reds, Teixeira gave praise to Jurgen Klopp, the manager who gave him most chances to play for the club.

“I have fond memories of Liverpool days. Klopp marked me a lot, I worked with him for almost a season and that’s a reason to be proud. What stood out the most in his work was the intensity in games and training. The team’s game was based a lot on intensity.”

João Carlos Teixeira joined Liverpool’s academy in a move from Sporting in 2012. In his years at the club, besides loans at Brentford and Brighton, he had eight appearances for the Reds, mostly in the 2015/16 season.

He left Anfield for Porto in the summer of 2016. Things didn’t work well there either, as he only stayed for one season, later joining Braga, Vitória Guimarães and finally Feyenoord, where he’s been playing since 2020.