With Xavi Hernandez now back at Barcelona as manager, the return has provided fertile ground for all kinds of transfer rumours to be launched about the Catalan club.

Liverpool’s Thiago Alcantara has been dragged into the picture, and the claims have since gone on a journey of rumour laundering. It all started on Twitter, from not the most reliable source, and then was picked up by Sky Deutschland.

Sky Deutschland credited the original source, but many others are now simply claiming the news came from ‘Sky’, hence the claims now being everywhere.

Out of Sunday’s Spanish newspapers, Mundo Deportivo take the closest look and rather than back up the claims, they explain how Barcelona would look at the situation.

Thiago ‘fits Xavi’s style’, which goes without saying, and it’s made clear Barca are looking for players who could move on loan in January. They’re identifying options who aren’t playing much at their current clubs, hoping to be able to convince the parties involved that a temporary deal is right.

Having only played 247 minutes of football for Liverpool this season, Thiago fits into the bracket of not playing much, although it needs pointing out that a big reason for his lack of games is fitness… or a lack of it. 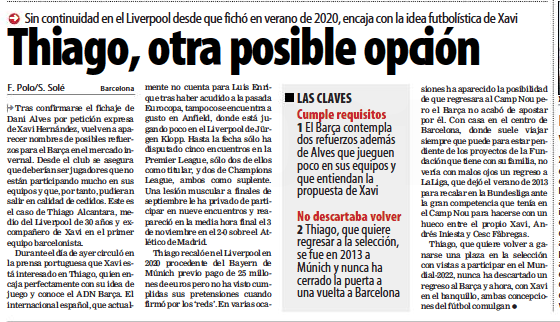 Last season was similar at the start, but when he was available from the end of December onwards, Thiago was a regular for Jurgen Klopp.

For this rumour, and frankly that’s all it is at this stage, to have any chance of gaining wings and taking flight, it would surely need Klopp to decide he can’t rely on Thiago due to the player’s repeat injuries.

That feels unlikely midway through the season.