Mateusz Klich to Leeds United looked like a potentially promising transfer when it happened.

The one time Poland international (he made his last appearance in 2014) was keen to get himself into World Cup contention and had been doing reasonably well with FC Twente.

131 Championship minutes later for Leeds United and he’s already gone, on loan to FC Utrecht for the rest of the season. But that’s not dampened the player’s outlook, and De Telegraaf have got a few words from Klich about his Leeds United exit.

“That’s my personal goal (getting in the Poland team). By making more playing minutes I hope to get the World Cup. My goal with FC Utrecht is to qualify for European football.”

FC Utrecht are currently sixth in the Eredivisie so there’s a reasonable chance of the European football aim, and if the Dutch club make it then Klich could be around to play. 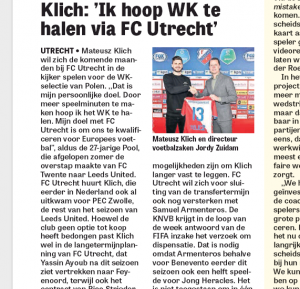 De Telegraaf say although there’s no stipulation in the Leeds United loan about a permanent move, ‘Klich does fit in the long-term planning of FC Utrecht’.

It’s claimed that at a later stage the club will look into whether there’s a chance to keep Klich at the club longer than his current loan.

Maybe Leeds United should have got some kind of commitment from Utrecht about a summer transfer, in case they’re not impressed.