As we often cover here, the Portuguese press has a special interest in how their managers and players are doing in the UK.

Manchester United, Hull City, Rangers and Wolverhampton Wanderers have all had many stories in the past few months, and Marco Silva’s Watford is obviously another one getting  attention.

Portuguese newspaper O Jogo brings a full page story on the Hornets today, calling the club the ‘king of spectacle’ because of the ‘entertainment’ their game style brings.

The article is actually largely based on data from Opta, which shows the efficiency Watford have when they manage to shoot. But, the Portuguese media will take any reason to praise Silva. 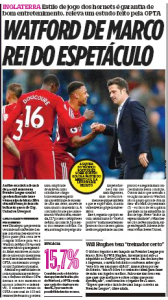 O Jogo even takes quotes from the Hornets’ recent signing Will Hughes praising Marco Silva, just to show the Portuguese manager is the real deal.

Although the Portuguese league is not bad, and often reveals great players, the Premier League is clearly on a level above and that’s the main reason to attract interest from the local media.

The arrival and success of Portuguese managers in England have clearly been boosting this coverage, making the league even more popular in the country. Even when there aren’t big exclusives..

Will we see a Watford fan base in Portugal soon? Maybe, at least if Marco Silva stays long enough for that.