The defender’s in his final year of contract and has decided against signing an extension at Etihad.

That’s why Mundo Deportivo have a big headline on Tuesday stating it’s a ‘Key week for the signing of Eric García’.

It’s claimed the Catalan club are determined to try and complete the centre-back’s signing, even though he’s still contracted to the Citizens.

Having sorted out the situation with Lionel Messi, Ronald Koeman’s side will now shift their focus on bringing new players to the club.

Their agenda includes contacting Pep Guardiola’s side in the ‘next few days’ to start the formal process of negotiations for the newly capped Spain international’s signing.

Mundo add the bargaining over a fee will start from scratch at the club level.

Guardiola’s side rate García at around €25m, but Barcelona consider this figure ‘excessive’ for a player whose contract is until 2021.

Barca have already contacted the 19-year-old’s entourage and have found out about his desire is to return to his old club. Both the Spanish giants and the player want to close the operation this summer, and will work together to try and get the deal done. 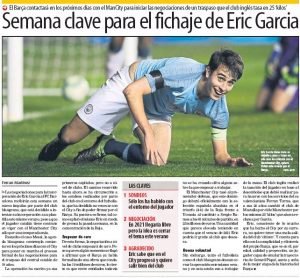 The teenager, however, doesn’t want a ‘bad exit’ from City as he’s thankful to the English club for what they have done for him.

Barcelona may find it difficult to sign García summer if City continue to demand in excess of €20m.

The Premier League club, on the other hand, risk losing the young defender for nothing next summer.

It’ll be interesting to see how things develop in the final weeks of the summer transfer window.