Juan Miranda was one of the standout players for Spain in the Euro U19 championship and was included in the top 10 players of the tournament.

With Barcelona continuing their pursuit of Real Betis’ Junior Firpo, a ransfer could be on the cards for Miranda.

According to Sport, the La Liga winners contemplated the option of involving the 19-year-old as a part of the deal to sign Junior, but the former isn’t open to that option. He would prefer a move abroad.

Juventus and Marseille have taken interest in securing the services of the youngster.

Sport states the Turin club’s idea is to sign the fullback on a permanent transfer. However, the Bluagrana don’t contemplate the idea of losing Miranda to Juve. They will only let him go on loan for a season, but with a ‘return ticket’.

Marseille’s sporting director Andoni Zubizarreta, who is close to Valverde, has received good reports about Miranda. 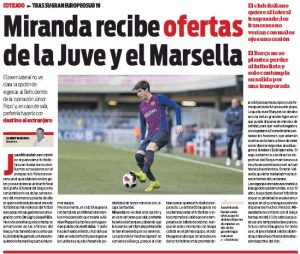 The Ligue 1 side would prefer to take him on a loan deal and a temporary deal also fits in line with Barcelona’s plans for Miranda.

The negotiations between the two clubs will move forward in the next few days.

Maybe once upon time, Barca wouldn’t have contemplated signing Junior Firpo and would have instead brought Juan Miranda through.