Sometimes, we like to be ahead of the curve and we’ll try and explain why a story you haven’t seen yet but probably will should be ignored.

Today’s example is that of N’Golo Kanté and Juventus’ ‘plan’ to sign the player in the summer.

We noticed the story in Corriere dello Sport going quite big on the matter, explaining how the situation at Chelsea is currently difficult and how the Frenchman isn’t getting along so great with Maurizio Sarri at Stamford Bridge.

The problem here is it isn’t their story, it’s Le10 Sport’s.

The Italian newspaper don’t name the French outlet, probably because they saw the story elsewhere, but having covered the original, we can tell you that’s where it comes from. 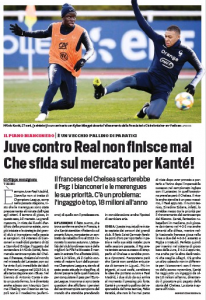 Corriere talk about ‘new information, which has been confirmed in France’ without ever naming where they read it, and list the exact details in Le10’s report, mentioning Real Madrid as well as Juventus.

We’re just doing this so that, for those who are reading this, you’ll know when you see someone, somewhere, claiming that ‘reports in Italy’ state that Juventus are interested in N’Golo Kanté.

Because that will happen, as Corriere dello Sport’s stuff tends to travel fast within 24 hours of publishing.