Much like Emre Can’s transfer to Juventus last season, the Serie A champions’ announcement they had reach an agreement with Aaron Ramsey to transfer the Arsenal player to Italy June came as a surprise to absolutely no-one.

Now that the worst kept secret of the past few months is out, Gazzetta dello Sport had a long chat with the Italian club’s director of football, Fabio Paratici, about his transfer strategy, what it was like to sign Cristiano Ronaldo, and, of course, winning the race for the Welshman.

What he wanted to focus on was why they signed Ramsey rather as to how, and he gave a rather lengthy explanation.

He said: “We got him, but he’s someone very different to what we have. We don’t have anyone like him in our squad. He’s more technical than some of our midfielders, even if he runs a lot, he’s less ‘nasty’ in defence, less tactical. He’s a final ball man, he has an eye for goal.

“Ramsey is, I think, someone who has yet to find his position because he hasn’t played in a midfield three, which his is role, capable to come in from deep, with quick passing. He can also play a bit further up the pitch, like Perrotta did at Roma, for example.” 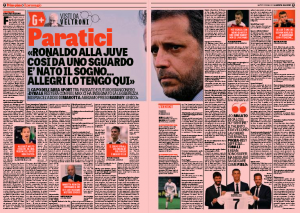 Arriving at Arsenal from Cardiff back in 2008 for a fee of around £5.7m, Aaron Ramsey has been, except for a couple of loans to Nottingham Forest and back to Cardiff, a stalwart for the Gunners over the past 10 years or so.

He has made 361 appearances in all competitions, scored 62 goals and picked up 64 assists along the way, and will probably add one or two more before the end of the current campaign if Unai Emery doesn’t push him to one side.

That hasn’t been the case so far.