Home Premier League Arsenal Juventus back in line for Arsenal’s Özil, never ones to pass up...
SHARE

Having disappeared for a long, long time, Mesut Özil to Juventus is back with a bang, as Corriere dello Sport on Monday dedicate a whole page to the potential free transfer.

Having failed to renew his contract at Arsenal, it seems more and more likely the Germany international will leave the Emirates for nothing in the summer, and the Serie A outfit will be there, waiting.

Corriere explain Juventus have been following Özil for around three seasons now, but that doesn’t mean he’s one of their priorities right now.

They know it’ll be very difficult to convince him to move to Italy, especially if other big clubs, like Manchester United, start circling, but they are hoping his friendship with Sami Khedira and the opportunity to discover a new league could swing the balance in their favour. 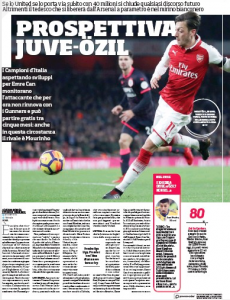 Corriere also make it very clear this would always be a summer deal, and never one for now, so let’s not get ahead of ourselves with claims about x amount of money being offered to speed things up.

Frankly, this, to us, seems like a ‘yeah, it makes sense, let’s write it’ article, with a lot of ifs and buts, but not a lot to it.

We’re already bracing ourselves for a ‘Juventus make last ditch for Alexis Sanchez’ one in the coming week or so.