Long, and we mean long, linked with Lazio prior to his rather surprising move to Aston Villa in the summer, Wesley Moraes never really came close to signing for the Italians.

The Brazilian striker has already settled quite nicely at Villa Park since arriving, scoring a great finish past Jordan Pickford against Everton in their only win of the season so far, and appears to be the undisputed number one striker under Dean Smith.

Over in Italy, one of the big questions was how did a (albeit rather well off) newly promoted side manage to snipe a promising talent from under the nose of a club qualified for the Europa League.

Well, in an interview with Corriere dello Sport, Igli Tare, the Serie A side’s director of football, explained all. 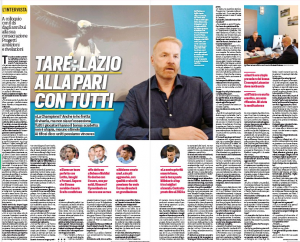 He said: “It was just a technical matter. I plan the transfer window way before it starts. [Wesley’s] acquisition was planned in case Felipe Caicedo left.”

The Ecuadorian came rather close to doing so over the summer, but when it became clear the interested sides weren’t going to meet Lazio’s demands, they decided to keep the target man.

In fact, Tare announced the player had already accepted a new contract renewal and would put pen to paper on it in the near future.

As they say, one man’s loss is another man’s gain, and it seems Aston Villa walked away winners in this one, even if they paid £22.5m to do so.

Norwich City interested in forward – Official sent to Emirates this...