Louis Ducruet is the nephew of Prince Albert II of Monaco and the son of Princess Stephanie, so was always going to have a privileged start in life.

Given a role as an assistant to the vice presidents at AC Monaco, Ducruet sees the French principality club as the one of his heart, but things went a little sour towards his end there. Clearly not feeling like he was being given enough prominence, the 28-year-old looked for a new adventure, and that’s where Nottingham Forest came in.

Speaking to French newspaper L’Equipe, Ducruet has explained it was François Modesto who contacted him about a role with the Championship club. But it’s not only Nottingham Forest who he’ll be working in an advisory capacity for, also having a position overseeing business at Olympiacos.

The two clubs share the same major shareholder, Evangelos Marinakis, so it makes some sense for the roles to be linked.

L’Equipe quote Ducruet as saying: “Our first contacts date back to mid-June. I had hinted that I would not extend at AS Monaco. The negotiations did not go as I wanted. I also wanted to see something else. François Modesto got in touch with me. He occupies the sports management between Nottingham Forest and Olympiacos, which are owned by the same shareholder. François was the main intermediary. With just one phone call he convinced me.”

Modesto had been a player at Monaco and then had a role behind the scenes which is how he built a relationship with Ducruet. Asked if Nottingham Forest was the only option, he told L’Equipe: “I have had them in Belgium, Switzerland, and even in France. But I looked for real professional progression while wanting to continue learning in a great football country like England. Nottingham Forest remains a historic club even though it is in the Championship. They won two European Cups and were English Champion. Next to it is Olympiacos, which also opens up other discoveries for me. It’s a huge learning opportunity.”

Officially titled a ‘senior advisor’ at Nottingham Forest, Ducruet was asked to explain what that actually involves, and responded: “I already have a place on the board. I act as a main adviser on international projects. I am on recruiting with François. I am also involved in commercial and marketing files. 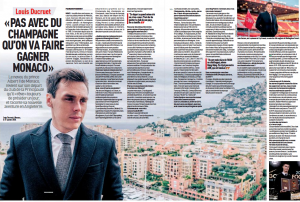 “I went to Athens in September and presented the club for the Champions League game in Marseille. But my main functions revolve around Nottingham Forest. I was there all last week. I go there in one week rounds but I still stay in the principality for protocol and above all personal reasons for the moment. When I’m at Nottingham, I try to do at least two games from the first team and one from the reserve. The club have a strong academy and build on their training, even more so in the future with Brexit.”