Marko Arnautovic is Austria’s footballer of the year, as voted for by fans in association with Kronen Zeitung.

The Austrian newspaper have the West Ham player on the front of their Tuesday edition, celebrating him picking up the award, and inside there’s an interview with the forward.

His current club and a potential transfer, after all the China rumours before and during the winter market, aren’t touched upon, and Arnautovic is more asked about his progression as a person and footballer.

Not so long ago, he wasn’t such a darling of the Austrian public, and the player’s bad behaviour earlier in his career continues to be a part of his reputation.

Kronen Zeitung put it to the West Ham player that there’s been a ‘transformation’ from a ‘Bad Boy’ to someone loved and appreciated in the country, and he replied: “This “Bad Boy” thing will follow me for a long time (laughs). I used to do things without thinking twice before, today it’s different. I have matured enormously, both as a person and in sports. You just get older and smarter. Of course, the family contributes a great deal to this, and my agency Next Sports Marketing has also always given good advice on the side.” 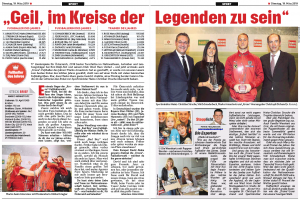 On the added recognition is his home country, Arnautovic made it clear he’s happy his efforts are being recognised: “I think that in recent years I have proven that I am always with the heart of the national team and will give everything for my native Austria. The fact that the fans get my and our hard work for our team and our country, and reward this, is very pleasing.”