Both the Catalan newspapers have jumped on comments made by Jurgen Klopp following Liverpool’s defeat to Tottenham on Sunday.

Klopp didn’t say anything concrete about Philippe Coutinho, but it’s the vagueness of the manager’s comments which has caused some excitement Spain.

Whilst Mundo Deportivo have Coutinho to Barcelona on their front page, again, the other Catalan sport daily have their story tucked into the middle of Monday’s newspaper.

Klopp’s “We’ll see what happens in January,” may mean nothing whatsoever, but it’s being taken as a sign Coutinho could leave in the winter window. Sport say the Liverpool manager’s ‘change of story’ is a sure statement something could happen. 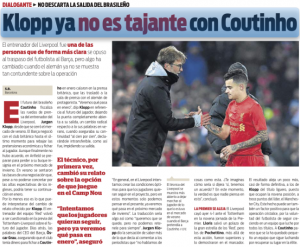 Of course, in reality it’s probably just a turn of phrase, but the Catalan media got themselves so worked up with Klopp’s summer denials of a transfer that they’re seeing this as the start of the manager giving in.

Liverpool’s clear failure to show they’re up for a title challenge is also seen as a good sign for Coutinho moving to Barcelona in January.