The Catalan media have been trying to sell Rafinha all summer. Barcelona have other options in Rafinha’s position and with the player’s big backer Luis Enrique leaving the club, an exit seems possible.

However, there’s been a lack of takers. Arsenal have been linked repeatedly, without anything really concrete, but now the favoured club is Liverpool. Links to Anfield have been building over the past few days, and Mundo Deportivo have now gone into some detail.

The Saturday edition of Mundo Deportivo claims Jurgen Klopp has asked Liverpool sporting director Michael Edwards to get the signing done. Klopp is said to be ‘especially interested’ in Rafinha and an offer, although it’s not concretely stated whether this has been made yet, is estimated at €30-40m.

Rafinha to Liverpool could be a way in for Barcelona, in their quest to sign Philippe 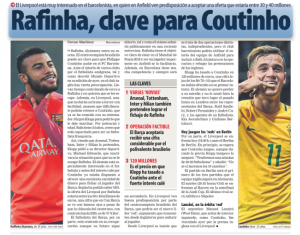 Coutinho, believe Mundo Deportivo. And that, in our opinion, is the whole reason for Liverpool now being the club most linked to Rafinha.

The 24 year old is a good footballer but he’s very much on the fringes at Barcelona, and €30-40m simply sounds over the odds. Liverpool interest isn’t unbelievable on its own, but they certainly don’t need to send Coutinho to Barcelona to have a very good chance with a reasonable offer.