When Jurgen Klopp arrived at Liverpool it was sure Inaki Williams would continue to be linked with the Premier League club. The Athletic Club Bilbao attacker had been linked to Liverpool repeatedly for some time, and one of the clubs often thrown in as competition was Borussia Dortmund.

Dortmund’s interest was rumoured repeatedly in Spain when Klopp was manager of the German club, with it being believed Inaki would be the perfect match for the manager’s system. The Dortmund, Klopp, and Liverpool rumours matched perfectly.

Liverpool links haven’t gone away, and Thursday’s edition of Mundo Deportivo highlights that Inaki moving to either Dortmund or Liverpool is once again popping up around the European media.

That’s thanks to Barcelona’s transfer intentions, and the possibility of Liverpool or Dortmund, or perhaps both, finding an extra €100m+ in their accounts pretty soon.

Mundo Deportivo point out this represents ‘another chance’ for Klopp to sign the player, even if he’s not what Liverpool really need right now. 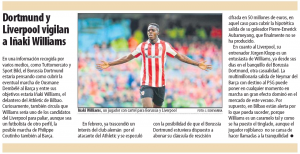 Inaki has a buyout clause of €50m and wouldn’t be leaving Bilbao for a Euro less than that.

The fee seemed quite high when put into his 2016 contract extension, but given what’s happened since it’s now slightly more reasonable for Liverpool or Dortmund.

This is simply a sideshow to Barcelona’s transfer business, but the possibility of one of the clubs considering Inaki is reasonable.