For the Spanish media, a player putting in a great performance against either Barcelona or Real Madrid is something to shout about.

It’s entirely understandable, playing against the two greats is usually a real test, especially when away from home.

That’s why AS are today talking about Junior Firpo’s ‘explosion’.

He was already receiving transfer attention. Back in June there was concern over Arsenal interest, with it being explained Unai Emery could snatch the player for his release clause, which was then €25m.

In September, El Confidencial reported Pep Guardiola had been impressed since the 22 year old made his debut for Betis in February.

At that time it was stated Junior’s new release clause, having renewed his contract in August, was €60m. A lot of money for a left back, albeit versatile in position, who Manchester City don’t really need.

Junior has had an eventful three games. A goal in a 3-3 draw against Celta Vigo was followed by an assist in a 1-1 draw against AC Milan, and then by another assist, and a very good performance, in a 4-3 away win against Barcelona.

Arriving in Spain at just six years of age with his family, Junior didn’t know much about football. In the Dominican Republic it had all been baseball and basketball.

AS report that after problems settling in at school, the youngster’s parents found him a football club so he could use some of his energy. He didn’t like it, and often returned home from training in tears. 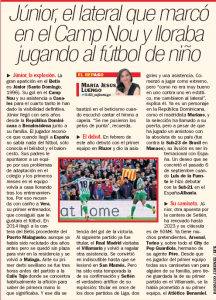 Things changed, thanks to an attentive coach, and now the then young boy is a young man who has come under the consideration of Luis Enrique for the Spanish national team.

AS disagree on the clause amount, they say it’s €50m and that there’s ‘many suitors’ for Junior. Arsenal and Torino are name-checked, but ‘especially Man City’.

The player’s agent is Pere Guardiola, brother of Pep, which would give the Premier League champions the advantage of regular communication at least.