In the modern world in which Twitter and Facebook dominate daily life, more than one famous person has ended up embarrassed by something they posted in the past.

It’s something that’s slowly worming its way into football too, with numerous footballers having been forced to apologise for something they’ve previously posted.

Most of these come from tweets when they were much younger and unaware that years later, their comments would come back to haunt them.

That’s currently the case for Junior Firpo. He’s been linked with Barcelona this summer and, unfortunately for him, tweets he posted insulting Lionel Messi have emerged, and he’s now apologised

“It’s something that does not matter, and I can explain without a problem,” he explained to Mundo Deportivo.

“It turns out that my best friend was then Barca and so he was also a fan of Leo Messi, who is the best because without discussion. And I told him to post nasty things about Messi on Twitter. That’s all kids stuff.

“They are things that are done when you are 15 years old, and no one knows you and you cannot think that’s going to have an impact years later, because when you put it you don’t think you’re going to reach football professionally.

“But I also say that if those tweets offended someone then I apologise and apologise again, I do it humbly and without problems. “

“He (Messi) is the best in the world by far, there’s no doubt. I always say when talking about the Ballon d’Or: They have to give it Messi and then create a prize for the rest of us and see who deserves it more.”

Junior was also asked about the possibility of joining Barcelona this summer, with that move looking possible at this point.

The Catalan side are reportedly on the hunt for a long-term replacement for Jordi Alba, and Junior is the man they have identified to fill the role.

Earlier this summer it seemed a move was close to completion, but the progress has stalled in recent weeks, with Betis holding out for a high price. The talks are ongoing, and Junior has admitted the links are an honour for him.

“The truth is that it is a compliment and pride linking you with major clubs such as Barcelona,” he added. 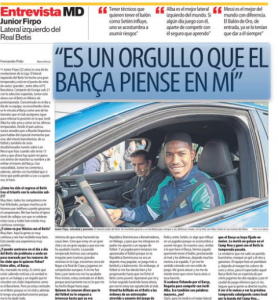 “But I’m focused on Betis because it is my club and I’ve got him enormous gratitude because they gave me everything.

“For me, Jordi (Alba) is the best left-back in the world, a great player able to defend and also attack with great danger. If I one day play with him, apart from competing with him, certainly I can learn a lot by his side.”

“I cannot deny is that it is an honour and pride to be associated me with Barcelona, ​​which is a great club and has a great team. I’m now at Betis, and what has to happen will happen.”