Dutch newspaper De Telegraaf linked Real Madrid with Frenkie de Jong on Monday, and now there are numerous spin off stories all around the Spanish media without anyone seeming to make the effort to find out if it’s true or not.

One of the more interesting slants comes from AS, and they explain that if Lopetegui has identified the player for Madrid’s midfield then he’s worth listening to, given his background with spotting and developing young midfielders.

A prime example for that is given as Wolves’ Ruben Neves. Lopetegui promoted the 17 year old to Porto’s first team, and AS state ‘today that kid is indisputable in the Wolves team’.

Other big ticks which back up Lopetegui’s ‘excellent touch’ with midfielders are given as signing Casemiro for Porto, on loan from Real Madrid, and trying to get the Portuguese 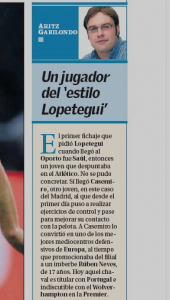 club to do a deal for Saul when he was yet to fully break-through at Atletico Madrid.

We all know where this is leading, don’t we.

A few more good Neves performances for Wolves, De Jong’s price going even higher than the artificial €80m it’s currently been pushed to… and the Ruben Neves to Real Madrid as a pick of Julen Lopetegui rumour will be born.