Juan Mata’s future at Manchester United was doubted even before Jose Mourinho was announced as the club’s manager, given their past at Chelsea. There was report after report explaining that Mourinho would get the job and one of his first pieces of business would be to sell Mata, or at least push him away from the club’s nucleus of used players.

That wasn’t the case and whilst things have at times looked like they could get rocky at Manchester United between Mourinho and Mata, things have been pretty much calm and the Spaniard remains an important player for the club. He’s not been pushed out of the picture like at Chelsea, and there’s been no serious chance of a transfer.

This week’s edition of French newspaper L’Equipe has a feature on Mourinho and an interview with the Manchester United manager. As part of that they’ve asked a few people about their relationship with Mourinho, and Mata was an interesting pick given their Chelsea history.

“There was a lot of talk about my relationship at Chelsea with Jose Mourinho that was false, that I became a pariah, that we were in constant conflict… Of course I was not happy to play less than before, and that I was happy to go to Manchester United, but our relationships have always remained cordial, although communication had become more difficult in the end.

“The fact is that with Mourinho, even when you are not in the starting lineup, you continue to learn. He is a coach that is crammed with ideas, who is incredibly meticulous, demanding, and pays attention to every detail. With him, as with all my coaches, Emery, Koeman, Benitez, I learned a lot, even though I was no longer the holder of the two 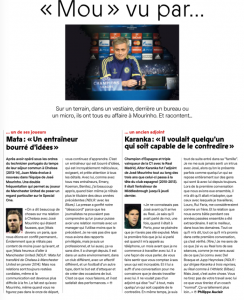 previous years. The press has inflated our “disagreement” because journalists could not understand that a player can have a normal relationship with a manager who uses him less than the previous one. I am not going to say that we have a privileged relationship, but I am a professional, and it goes without saying.

“He’s since changed. He’s in a different environment, in a different club, with a different squad, and a different type of football, the goal of which is to attack and create goal opportunities. This is what we do, and he is satisfied with the performance.”

Mata seems to be suggesting that Chelsea required a type of football more defensive than Manchester United, and that’s something Mourinho has himself put forward. Antonio Conte has been incredibly successful with Chelsea this season, considering their last campaign, but Mourinho has more than once insinuated they’re defensive and play on the counter-attack.

Conte and Chelsea would argue that the club now play much less defensively than during certain spells when Mourinho was in charge at Stamford Bridge, and they’re doing it pretty well.