This morning, we covered a piece from Portuguese newspaper Record about the future of Filip Krovinovic.

The outlet said West Brom are keen on making the midfielder’s loan deal permanent, and could spend €10m on the signing.

The story didn’t have any information on Benfica’s stance regarding these numbers, and that’s why they bring their own opinion on it.

On their columns page, Record asked journalists João Seixas and Alexandre Moita if Benfica should accept an offer from the Baggies for Krovinovic.

Seixas was the first to answer, and was the favourable about it.

“In a phase of some uncertainty regarding the future and where the economic aspect is increasingly relevant in the football panorama, I consider adjusted a possible sale of the Croatian midfielder by Benfica. It’s not certain that the player has the capacity to assert himself at the Luz club, therefore, it’s better to redeem the €10m now than to risk a greater devaluation of the midfielder’s value.” 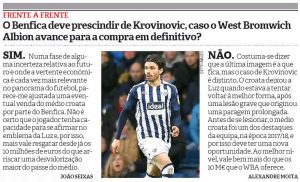 Moita, on the other hand, believes Benfica should turn it down.

“It’s often said that the last image is the one that remains, but Krovinovic’s case is different. The Croatian left Luz when he was trying to get back in top shape, after a serious injury that caused a prolonged stop. Before getting injured, the Croatian midfielder was one of the highlights of the team, in the 2017/18 season, and so he should have a new opportunity. At the best level, he’s easily worth more than the €10m that WBA offer.”

Benfica spent €3.5m to sign Krovinovic from Rio Ave in the summer of 2017. He never managed to have a good sequence at the Lisbon side, having only made 28 appearances in his two seasons at the club. His quick adaptation to West Brom was completely the opposite, as he’s already managed to make 34 games for the Championship side so far.