Manchester City could propose Gabriel Jesus to Juventus in exchange for Paulo Dybala, according to reports in Italy.

The Argentine has over a year left on his contract and is not close to signing an extension with the Turin club.

Calciomercato.it explain the Serie A side are looking to avoid the risk of the 27-year-old leaving as a free agent in 2022. They want to make him available in the next market, if there is no progress in renewal talks in the coming months.

It’s claimed Dybala could be an ‘extra weapon’ for the Old Lady in the summer, and that’s when the Citizens come into the picture.

Journalist Graziano Campi made some claims on the possibility of a Jesus-Dybala swap deal to Top Calcio24, relayed by Calciomercato.it. According to Campi, there’s been contact between the Brazil international’s entourage and Juventus.

“More than PSG, watch out for Manchester City, who must replace Agüero. Dybala could go to City in exchange for Gabriel Jesus, whose entourage has already had a few talks with Juve,” Campi said.

Manchester City will be without Sergio Agüero next season and parting ways with Jesus will force them to bring in two new recognised strikers in the next window. 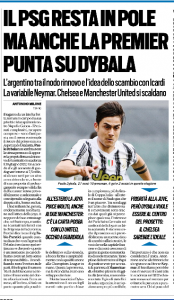 Tuttosport also has a report on the former Palermo star as they say his first preference is to continue with his current employer.

If the South American decides to leave Juventus, he doesn’t want to join a club where he will not be the first choice player.

A move to England is discussed and when mentioning the possible destination, the newspaper adds that City as an option for Dybala ‘should not be discarded’.