Until the end of April, the mood at Barcelona was positive, but things have been downhill since then.

Ernesto Valevrde saw his side give away a 3-0 first leg lead against Liverpool to suffer a 4-0 second leg defeat at Anfield in the Champions League semi-final.

Following the disappointment in the European competition, they wanted to finish the season on a high by winning the Copa del Rey. However, a 2-1 defeat at the hands of Valencia has resulted in a disappointing campaign for the Catalan club.

Questions have been raised about the coach’s future at the club, but Sport now claims fingers are also pointing towards general manager Pep Segura.

Since 2015, both Andoni Zubizarreta and Robert Fernández have left the club and, like they were, Segura is now being used to shield others.

On the other hand, the lack of efforts carried out to complete major signings has made president Josep Maria Bartomeu unhappy. He had to personally lead the charge to convince Frenkie de Jong to join the La Liga winners in January.

Bartomeu travelled to Amsterdam to close the deal for the Ajax midfielder and now has ‘taken command’ to help Barca in signing Ajax star Matthijs de Ligt and Atletico Madrid’s Antoine Griezmann. 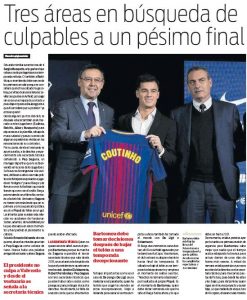 Though the club has Segura, technical secretary Eric Abidal and his assistant Ramon Planes, the report explains Bartomeu is now taking charge to help Barcelona secure the services of the Dutchman and the World Cup winner.