The midfielder confirmed that there was a clause which would force the Lions to pay him €5m in case they rejected a bid of over €35m.

And although Tottenham offered that amount, Fernandes says he didn’t want to receive that fine from the club, and even removed this clause from the current deal.

“They talk about millions without being sure what it is. Yes, it was accepted by me and my agent that this 35 million clause should be withdrawn, because I had the opportunity to use it and did not use it; so it made no sense to be there,” said Bruno Fernandes (via Record).

“There was also a payment from Sporting if they didn’t let me leave and that payment didn’t happen. As the renewal was made, I thought it was good that this money wasn’t used, because if it was, there was no renewal. I have shown more than once the respect I have for Sporting. Many people say, at a time when the club is struggling, that it’s a very strange renewal. But it’s easy to do the math. Five million [tax-free] for Sporting would be €10m [gross], and my renewal isn’t close to five million.” 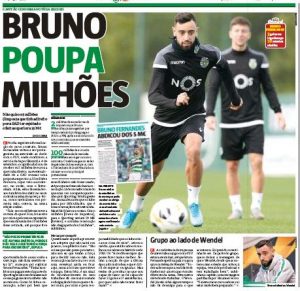 Speaking of his future, Fernandes has made it clear the new contract doesn’t change his situation at the club, especially because the contract’s release clause and expiry date continue to be the same.

“These are things I can’t promise, it’s not me who has the strength to decide this or not. This renewal has nothing to do with a possible departure or staying here, this is never what was at stake. I’m happy, it’s a sign of recognition of my work and it gives me more will and obligation to fight and want to do more, for myself and for the responsibility that the club puts on me.”

There’s only one club named by Record, and that’s Tottenham. They say Bruno Fernandes continues to be in the ‘radar of European giants’, and the main pretenders are ‘José Mourinho’s Tottenham’.

Bruno Fernandes’ contract with Sporting expires in 2023, and he’s protected by a release clause of €100m, although the Portuguese press keeps saying that €70m would be enough to take him.