Jose Mourinho has turned his attention towards a few Real Madrid players to strengthen Manchester United’s squad, according to AS.

Gareth Bale has long been on the Portuguese tactician’s radar. The Welshman is expected to be the main player at the club following the departure of Cristiano Ronaldo and with Julen Lopetegui replacing Zinedine Zidane.

It makes the former Tottenham star’s departure this summer ‘very complicated’. The situation has forced the 20-time English champions to target another player from the same club.

The Spanish newspaper claims the ex-Chelsea boss has set his sights on Toni Kroos. On June 28th, the same publication reported United executive vice-chairman Ed Woodward was ‘willing to make a great offer’ for the German international.

United’s manager ‘insists’ that the club sign the former Bayern Munich player to bolster his midfield. Kroos’ current deal with the La Liga giants runs down in 2022 and has a €500m release clause. 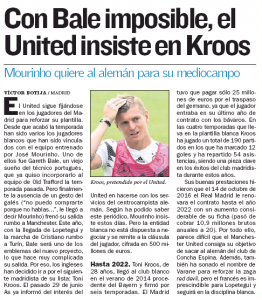 Real Madrid are unwilling to negotiate with the English club for their player and have also refereed to his buyout clause.

The Premier League side are also interested in Raphael Varane. However, the World Cup winner with France is ‘essential’ for new Real Madrid manager and therefore will continue with the 13-time European champions.

AS are talking up Manchester United interest in Real Madrid players, but also saying the club can’t have any of them.