James Rodriguez was arguably the best player of the last World Cup. He won the Golden Boot, scored the tournament’s best goal and was in every select eleven around, but Lionel Messi rather controversially won the Golden Ball.

Moving to Real Madrid with his stock huge, James has struggled to impose himself. The club’s undisputed stars of Karim Benzema, Gareth Bale and Cristiano Ronaldo are blocking the Colombian’s path. At times it’s seemed largely James’ own fault, there’s been attitude issues and questions about the player’s commitment and desire to fight.

Marca have an article in their Thursday edition on the club’s trio of frontmen perhaps getting too much confidence for the biggest games, and they suggest things should be shaken up a little.

Jose Mourinho ‘rubs his hands’ at the prospect of signing James for Manchester United in the summer, say Marca, should things not change at Madrid. It’s not just the Old Trafford club who would be interested, report Marca, and Mourinho would face competition over the deal. 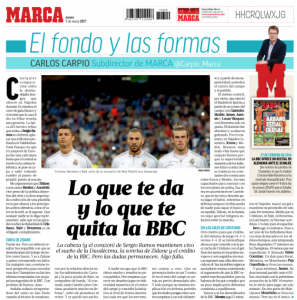 It’s not the first time Manchester United have been linked with James and it certainly won’t be the last, but Mourinho would surely have to be sure about the player’s temperament before trying to sign him.

Still just 25 years of age, James has plenty of time to kick on and become one of the very best players in the world, maybe he’d find that easier at Manchester United than he currently does at Real Madrid.

From Portugal: Player leaving Manchester United for ‘sporting reasons’, money not a problem

Player ‘expected’ to decide on Everton move by the end of...