Manchester United had an official at Benfica on Saturday evening, as the Portuguese club beat Vitoria Setubal 2-0. That’s nothing unusual, the Premier League club have someone attend nearly every Benfica match and have done for quite some time.

What is less common is O Jogo picking out a target. Usually it’s simply taken for granted that it’s impossible to know who Manchester United are looking at, given their scouting of Benfica has become so routine in recent years.

The flavour of the month for O Jogo, as far as Manchester United are concerned, is Alex Grimaldo, and there’s been a series of articles recently claiming serious interest from Jose Mourinho. 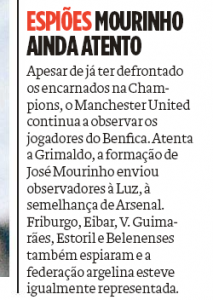 In their Sunday edition, the Portuguese newspaper say Mourinho remains ‘attentive’ to the left back, and therefore sent someone to watch the 22 year old against Setubal, even though it was a slightly less serious Taca de Portugal match.

It doesn’t look to have been one of Grimaldo’s better nights, because even though Benfica won 2-0, the fullback was only rated 5/10 by O Jogo.

Like elsewhere around Europe, Portuguese ratings are slightly tougher than those in England, so 1-1.5 can likely be added to that for comparison purposes.

Reaction to Celtic draw in Denmark: ‘Rhythm and confidence’ not enough, VAR ‘worked to perfection’

Reaction to Celtic draw in Denmark: ‘Rhythm and confidence’ not enough,...

Man United youngster unaware of ‘what his future will be’ –...